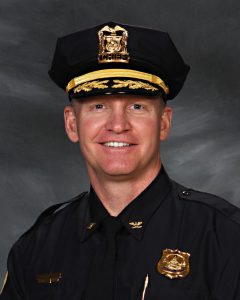 Dana Wingert was appointed as the Des Moines Police Department’s Chief of Police on February 10th, 2015.  He is a twenty-eight-year veteran of the department, and has served in every division as he moved through the ranks of the organization.  Chief Wingert’s previous assignment was as the Police Major in the Operations Division, where he was responsible for police patrol, Neighborhood Based Service Delivery, Metro Star, traffic and parking unit, K-9, Airport Security, and school resource officers.

Dana began his law enforcement career with the City of Des Moines in December of 1991 as a Police Officer. He was promoted to Senior Police Officer in February of 1995; then Police Sergeant in May of 2000; Police Lieutenant in January of 2005, Police Captain in September of 2007 and Police Major in February 2011.

Dana has a Bachelor of Science degree in Criminal Justice from Grandview University in Des Moines, Iowa.  He is also a graduate of the FBI National Academy and the Police Executive Training Program at Boston University.